We'll be here, even when you least expect it. 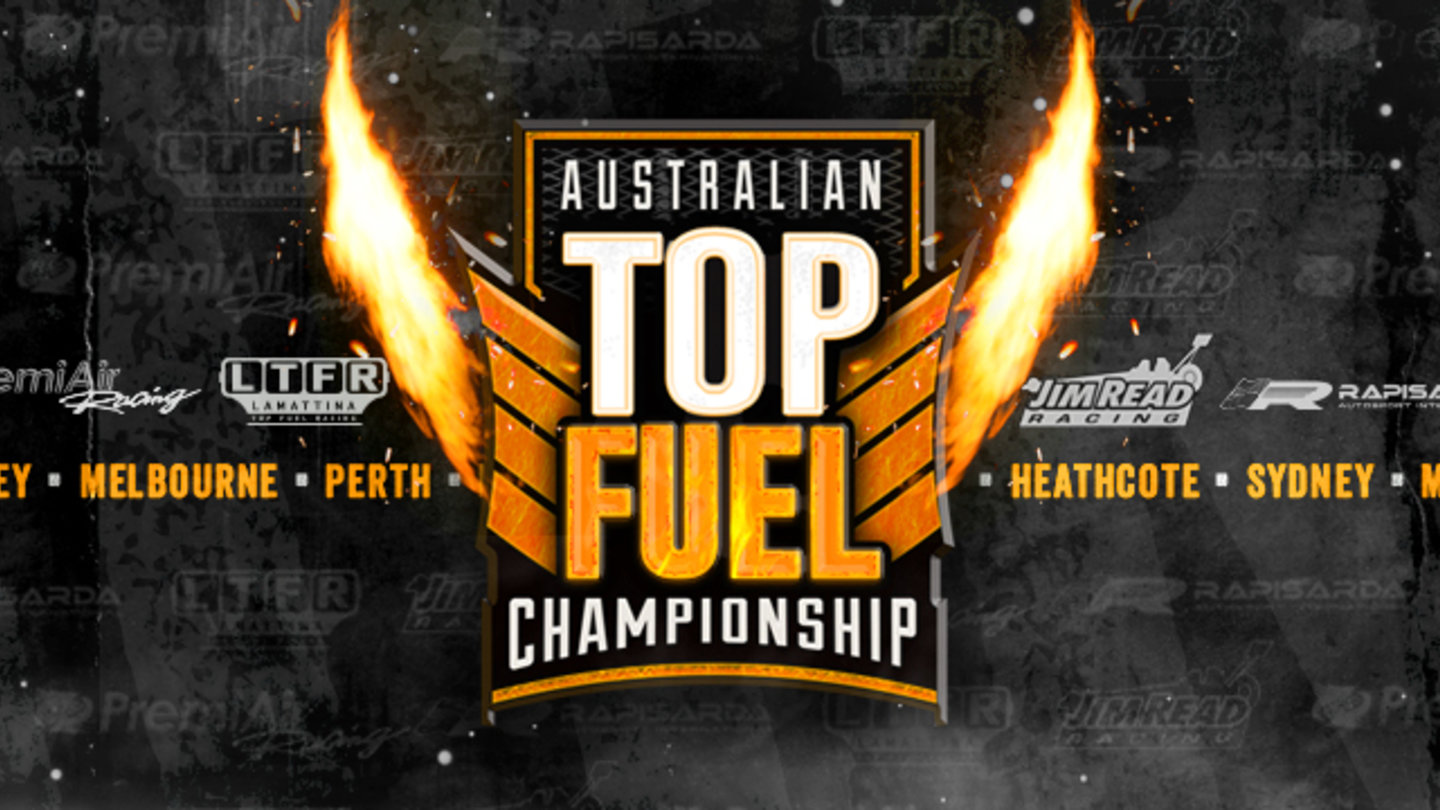 Jim Read Racing, Lamattina Top Fuel Racing, PremiAir Racing, and Rapisarda Autosport International have all committed to the new championship, and there’s no doubt there will be a few more exciting announcements over the next few months.

Series promoter, Nathan Prendergast from Ignition Productions, said “We promised the 2022 Championship will include six races across four states or territories, and there’ll be at least six Top Fuel cars racing at every round. That’s what we’ve delivered. How good is it for Victoria and WA to have Top Fuel racing back at their home tracks.”

It wouldn’t be drag racing without a bit of drama and intrigue, and the location of the Grand Final round remains a closely guarded secret.

Series promoter, Andy Lopez from Out There Productions said “We’ve held back announcing the last round because it’s a bloody big show with a lot of moving parts. But it’s worth the wait, and it’ll be a motorsport festival the likes of which we haven’t seen since the 1990s.”

With the first round scheduled for January 2022, drag racing fans around Australia will be treated to six months of nitro burning action with a massive grand final event.

All events in the Series will be over two days, with qualifying on Day 1, and an all-run format racing on Day 2. This sees the most Top Fuel cars racing throughout the event as possible.

The series will have a huge focus on fan engagement, giving spectators unprecedented access to the teams, the drivers, the cars, and all the action in the pits.

Peter Xiberras of PremiAir Racing added, “The Top Fuel teams said we were going to more tracks in 2022, and we are. No more State of Origin – this is a national series.”

Lopez says “We deliberately haven’t announced other brackets as yet. We wanted to get our dates out there so people could understand our plans.

“The Australian Nationals, Westernationals and Nitro Champs are established events with an existing program and we’re proud to be part of them. If your group wants to be part of top class racing, at an awesome festival, in front of big crowds at our championship opener in Sydney or Round 4 in Heathcote – we’d love to hear from you!”

Sydney Dragway has the honour of hosting the first round of the inaugural championship on Jan 21-22, the venue’s still fledging surface has been heaped with praise for its smoothness and traction since the upgrades last year. The Top Fuel teams will be back in May for the return of the traditional Nitro Champs event.

“It’s really fitting that Sydney Dragway is opening the Australian Top Fuel Championship at the spiritual home track of Top Fuel. We’re building an awesome opening event with the Top Fuel promoters, and we’ll kick of the Championship in style. And to have a second ATFC series at Nitro Champs in May is fantastic. It’s been a while since we’ve had at least six Top Fuel cars on the track – bring it on Sydney!” said Darryl Stephen, General Manager, Sydney Dragway.

The Top Fuel championship will then move to another returning major event on the Australian drag racing calendar in February with the running of the 52nd Australian Nationals and its true home, Calder Park Raceway. Like Sydney, the venue has received a number of upgrades in preparation for the Top Fuel insurgence.

“How good is it to have Top Fuel racing back at Calder Park at The 52nd Australian National? It’s been way too long in the making. We’ve been working hard with the promoters and teams to get this happening and very excited to see everyone involved is 100% committed to putting on a fantastic show for all the Melbourne fans,” said Peter Pisalidis, Calder Park promoter.

The series will move across cross the country to Perth Motorplex, which hasn’t experienced championship Top Fuel racing in a number of years.

Paul Trengove, General Manager, Perth Motorplex said “We’re stoked that the Australian Top Fuel Championship is coming back to the Motorplex. It’s a massive effort from the guys to travel more than 4000kms to race, but Motorplex is an awesome facility and well worth the trip. The WA drag racing community will come out in force to support the Championship at our flag ship Westernationals event.”

Finally before the series returns to Sydney and then the secret Grand Final event, it will be exciting to see Top Fuel at a rejuvenated Heathcote Park Raceway for the first time in decades.

The man behind the return of the venue to relevance, Lance Warren, Owner, Heathcote Park Raceway said, “My vision for Heathcote has been to create a world class motorsport venue, and that is exactly what my team is doing. Heathcote will be ready for Top Fuel in 2022. We’re working with Top Fuel management to build a new type of motorsport event that will become a permanent must-go fixture on the Aussie drag racing calendar.”

More announcements are to come about specific  event formats. With more cars, more racing, at more tracks, Aussie drag racing fans can get access to top quality racing no matter what track they’re close to, whether that’s at the new Australian Top Fuel Championship, the ANDRA Australian Drag Racing Championship, 400 Thunder, or any number of other great events. 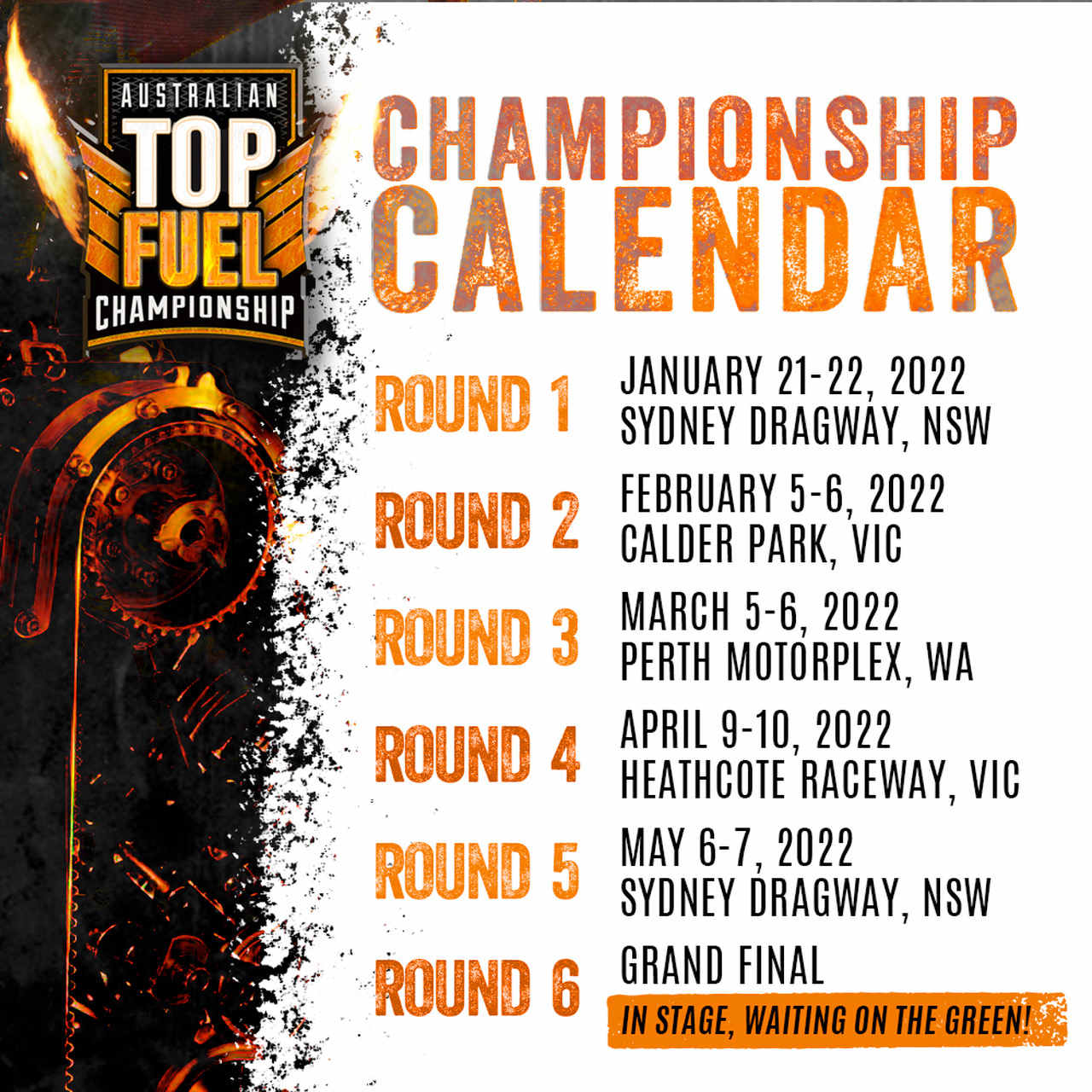 Something you need to know? Check out our Frequently Asked Questions!!